The legend of the Loch Ossian logbook

Fiona Russell, aka Fiona Outdoors, discovers the story of a legendary round loch run challenge at the remote Loch Ossian Youth Hostel in Corrour in the Scottish Highlands.

An ordinary looking folder lies on the clean, bare wood of the large table in the kitchen at Loch Ossian Youth Hostel.

I imagine it is part of the administration side of this hostel, perhaps a bank of information about walks or faded drawings of wildlife in the Scottish wilderness area.

It certainly appears well-used with a wrinkled black plastic outer, torn edges and yellowing poly pocket folders and creased paper sticking out of the sides.

I wonder if it might be time for Hostelling Scotland to invest in something a little fresher for their popular hostel...

Yet when I open the tatty folder I am suddenly absorbed by the contents.

Each page – and there are dozens – are filled with lines of names. Against each name is a date, number, country, time and a short comment.

It’s the “time” that is the important part.

For this, I realise, is a log book of people who have completed the fabled Run Around Loch Ossian Challenge in less than an hour. 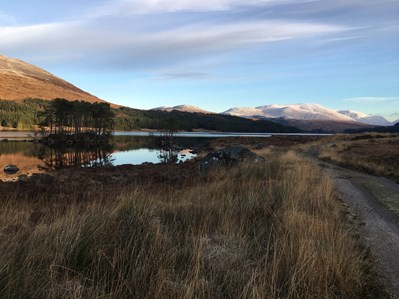 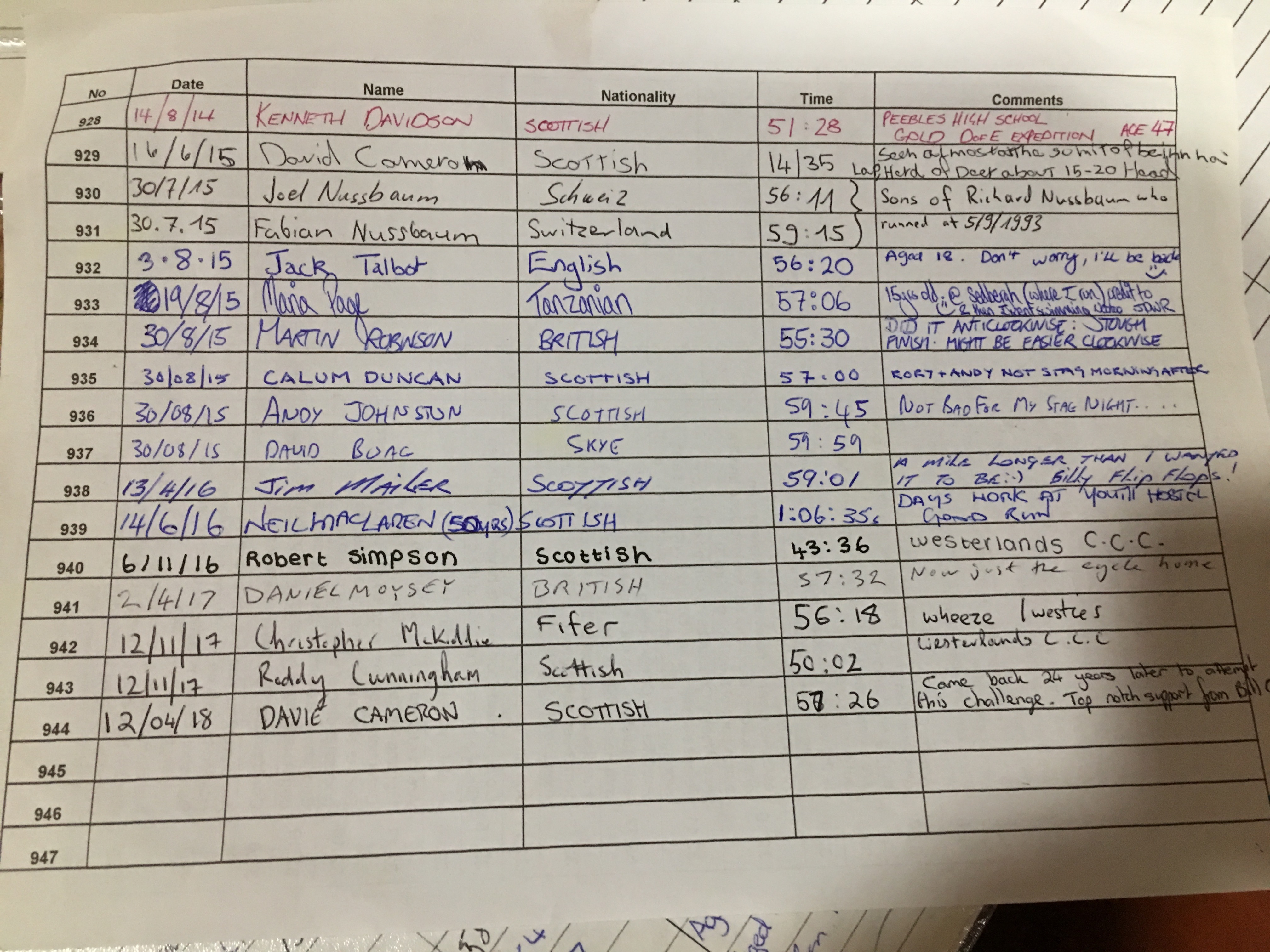 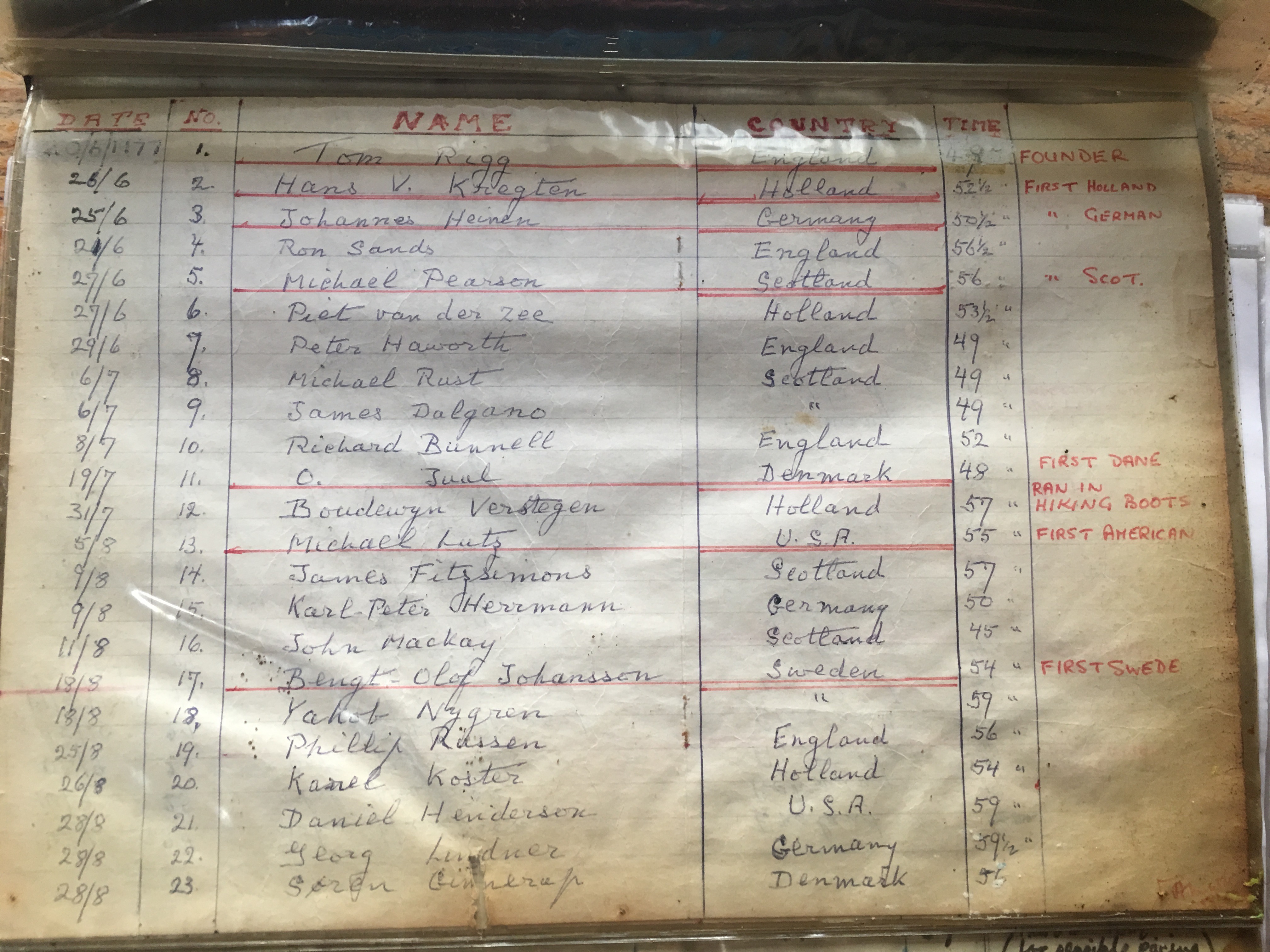 The story of the Loch Ossian run

The first entry on June 20, 1977, is by Tom Rigg, of England. His note is neatly written in black pen and reveals he ran 49 minutes to complete the 7.5-mile circuit of Loch Ossian.

His pacing is a very respectable 6.5-minute per mile, especially as he was in his late 40's at the time.

Tom, who passed away in 2015 aged 85, was a former Loch Ossian manager. He spent 23 years at Loch Ossian Youth Hostel and he was renowned as a keen runner.

It was his idea to start a logbook of runners who could complete the loop, clockwise or anti-clockwise, starting and finishing at the eco-hostel, sub-hour.

The next name is Hans V. Kregten, of Holland, who ran a slower time of 52.5 minutes on June 25 of the same year to claim the title as the first Dutch runner to complete the round-the-loch challenge.

The third name is Johannes Heinen of Germany on the same day in 50.5 minutes. Ron Sands, another Englishman, ran 56.5 minutes.

And so the list continues, with the first Dane on July 19, the “first in hiking boots” on July 31 and the first American on August 5.

“Tom Rigg actually ran round with me – I think he would do this with runners when he could – and he opened four locked gates in the deer fences ahead of me. This meant I didn’t have to waste time unlocking the gates.”

Back then, if Tom was unable to run with hostel guests he would give them the number of the locks on the gates.

Andy Spenceley, a member of Edinburgh-based Carnethy Hill Running Club, says: “I ran 43 minutes and 22 seconds in October 1990.  I got the number for the locks from Tom but I decided it would be quicker to climb over. I think that a lot of the people who ran fast times had the gates opened for them.” 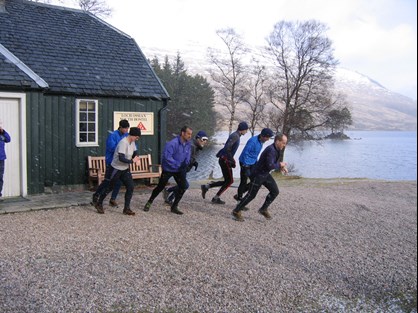 In times past, the hostel manager was required to record your time before you could add it to the folder, although now it is more a question of honesty. Indeed, the logbook has seen several changes of manager.

After Tom came Alan Mawson and then Thomas Janzen and his wife, before Jan Robinson took over eight years ago.

Thomas, who managed the hostel from 1999, reveals that there was a special sense of pride of the loch challenge runners. He says: “I was present on many occasions when guests had a go at the run, including when Tom was still the manager of Loch Ossian Youth Hostel.

“It seemed like they did it for Tom; to prove to him that they could do it and because that meant they were playing in the same league as Tom, the founder of this unique run.”

“Tom was always delighted for those who made it under the hour. Only about one in seven did.”

As well as the honour of being able to add your name to the logbook, runners could collect a “Loch Ossian 1hr Club” badge. It’s not known when the stock of badges ran out but Manny Gorman, of Kingussie, received his in October 1998.

Manny, 52, is a long-time member of Westerlands (Westies) Hill Running Club, based in Glasgow. He says: “It was the day after the night before when a bit of drink had been consumed by our club on its annual trip to Corrour. I wanted to crack a raging hangover – and I did. I was surprised to run 47.59 that day.” 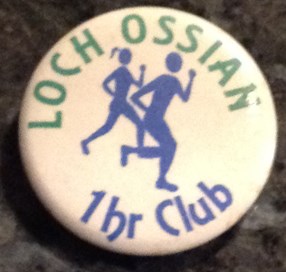 Maggie Creber, 58, of Kirkliston, near Edinburgh, is also proud to report that she still has her badge. She says: “My husband Chris and I had walked the nearby mountain of Beinn na Lap with our two young sons in the summer of 1999.

“While Chris cooked dinner, I decided to run around the loch. I am not sure if I knew about the logbook before we got to the hostel or not. Anyway, it was a lovely evening and I was reasonably fit so I managed it in about 50 minutes. I had a quick dip in the loch afterwards.”

Another part of the memorabilia of the Loch Ossian Run Challenge was a series of brass plaques. These were added to the wall of the hostel for every 100th runner. (They have since been removed during a refurbishment.)  A board once recorded the flags of different nationalities of runners, too.

Thomas has fond memories. He says: “People were very proud to be part of the club and they even paid for their own plaques.”

As a keen runner myself and a previous visitor to Loch Ossian, I’m surprised that I did not already know about the Run Around Loch Challenge. However, there is no record on-line; no website or Facebook page; and it appears that it is a word of mouth aspiration, or something that runners discover when they arrive at the hostel.

Some Scottish hill running clubs organise annual trips to the loch to do the run, as well as run in the nearby mountains. 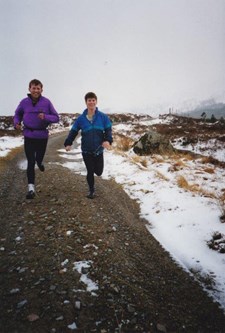 People run the route in all seasons

John Hamer, of Glasgow, came across the challenge through his hill running club, the Westies. He has run the loch every year since 2008 as part of an annual Westies trip. However, it took three years before he could record his name in the logbook.

John says: “On my first two attempts I ran just outside the hour. By my third time in 2010 it was a bit of a will-he-won't-he thing. With a crowd of Westies cheering me on at the hostel I finally did it. I managed it again the following year to less fanfare. I still enjoy running this beautiful route each November with the club.”

Kenneth Davidson, of Peebles, heard about the logbook through a friend who runs with the Carnethy Hill Running Club. He ran 51:28 in August 2014. He says: “My run was completed after a day on the hills so my memory of it was that it was a bit of a slog. I also remember having a short dook in the loch afterwards, to freshen up before dinner.” 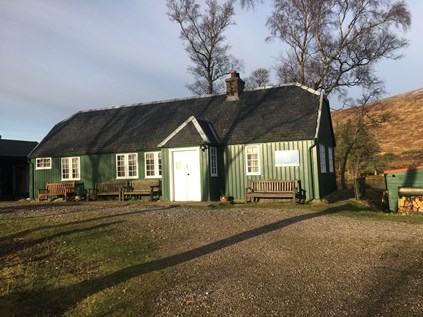 First, you need to get to Loch Ossian Youth Hostel. The Hostelling Scotland accommodation is 15 miles from the nearest public road and the only way to reach the area is on foot, bicycle or by train.

A fairly regular train service runs on the West Highland Line between Glasgow and Fort William and stops at Corrour, which claims the titles of the UK’s most remote and highest mainline railway station.

Alighting at Corrour might seem familiar. The station featured in the iconic 1990s film Trainspotting and was the scene of the movie characters, Renton, Tommy, Sick Boy and Spud, who “arrive in the great outdoors”.

There is a signpost showing the way to the hostel, less than a mile away, on a wide track.

From the hostel, the loch route is easy to follow. Rules of the Run Around the Loch state that you must touch the front door of the hostel at the start and finish.

The trail is flat to undulating and the north-westerly side of the loch is a little hillier than the opposite bank. The gates have been replaced by cattle grids.

There are plenty of rewards for your running efforts. The views are stunning, especially on a calm day when the surrounding landscape is reflected into the calm waters of the loch.

At the far end of the loch you can see, through the trees, a strikingly modern granite, steel and glass architecture of Corrour estate lodge, which was built in the early 2000s.

Perhaps, if your running steps are quiet enough you will spot some of the abundant wildlife of Corrour, including deer, pine martens and mountain hare, as well as a huge variety of birds.

The hostel is also famous for its friendly stag. One runner, Sandy Borthwick, of Edinburgh, recalls: “I was at Loch Ossian many years ago and there was a red deer stag actually inside the hostel.

“I confess I didn’t manage to beat the one hour loch run that time – actually I tried twice more and I was still just outside the time – however that stag and the amazing landscapes made up for the disappointment. It is such a great place to visit.”

The runners of today

Jan, who admits she has never herself attempted a sub-hour run of the loch, is philosophical about the tradition.

She says: “People come to Corrour for all sorts of reasons. Some will hike, mountain bike or swim in the loch. Others simply enjoy the wildlife and the incredible quiet. And, of course, there are runners, too.

“Some people still ask about the logbook. These are a mix of requests, some from runners who have done the route before and are keen to see the folder for nostalgia’s sake and others who want to do the circuit for the first time.

“There are also groups, especially those from Scottish hill running clubs, that book in each year and repeat the run every time.

“The logbook started by Tom Rigg all those decades ago continues and now appears to be something of a legend in certain circles.”

I return to the folder to read more of the entries. Once the plastic poly-pockets had been filled, separate sheets of A4 have been added. At some point – no-one seems to know when – there has been an attempt to create printed spreadsheets of the lists of names.

It’s enjoyable to read some of the entries. One reveals: “The youngest so far”, then I spot, “The first 14 year old”, “the fastest girl”, “run in cycling shoes”...

Some people are more delighted with their efforts. In September 1998, Tom Stanbridge comments: “The most scenic run I have ever done”, while in April 2007, Edward McLaughlin, of Scotland, writes: “A fabulous run” and in July that year, Thorsten Megow, of Germany, notes: “A pleasure to run.”

Why not head to Loch Ossian and give the challenge a go yourself?