Glasgow’s street art movement is lively and continuously evolving with colourful, thought-provoking works of art popping up regularly. For decades, street art has been used to express personal, social and political opinions, and walking around Glasgow to uncover its many murals is one of the best ways to get to know this fantastic city.

They say people make Glasgow, and these public works of art certainly capture the city’s vibrant personality. If you’re keen to discover more about Europe’s friendliest city, then make sure you check out our pick of the top 5 murals that make Glasgow…

This is the UK’s largest mural, stretching almost 200 metres. The work celebrates the people – past and present – of Strathclyde University. It was created in 2014 to mark the 50th anniversary of the Royal Charter, which established Strathclyde as the UK’s first ‘technological University’. The mural contains black and white imagery, representing students that have studied there in the past 200 years, with some colour on the mural representing more modern times.

By artists: Art Pistol, Rogue One and Ejek 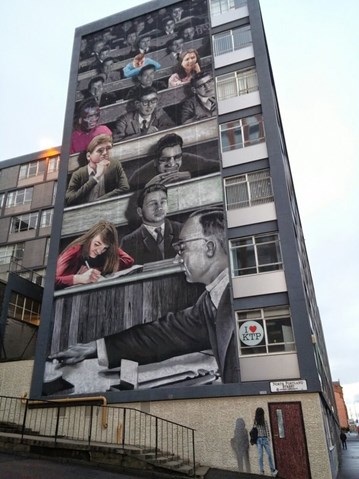 Just round the corner from Glasgow’s popular Barrowlands Ballroom you’ll find The Barras Pirate. The mural is also known as Pirate Girl and was created last year. It portrays 6-year-old Lola Murphy from Glasgow’s south side looking through a telescope keeping watch over her beloved city from her perch at the Barras. 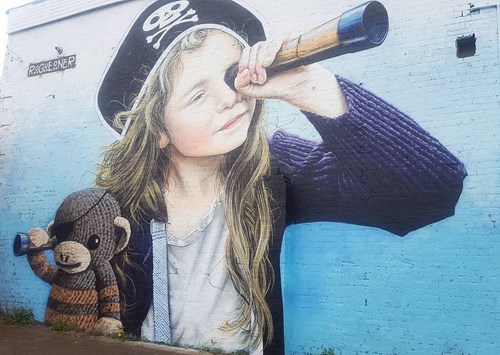 Glasgow’s most recent work of art took just one week to complete and appeared in August 2018. It shows St. Enoch breastfeeding her baby son St Mungo, who later became the patron saint and founder of Glasgow. Artist Smug (Sam Bates) has been praised for his depiction of the breastfeeding mother, hoping it will help to reduce any social stigmas around breastfeeding in public. 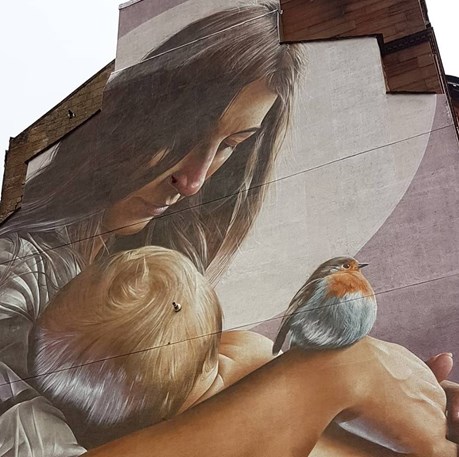 Three dazzling murals were created to celebrate the 75th Birthday of Glasgow’s most loved sons, comedian Billy Connolly. On first seeing the giant works of art, which are more than 50 feet high, the Big Yin was completely overwhelmed. He said:

“I’m truly amazed at the effect these have had on me. They’ve just completely stunned me.”

The murals can be seen in Dixon Street (just off St. Enoch Square), at Osborne Street right by The 13th Note café and bar, and on the Gallowgate. 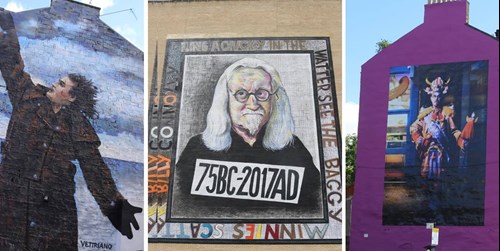 This mural is a welcome transformation of the frequently used underpass leading to Cowcaddens underground station and nicely captures the Glaswegian sense of humour. It shows a lesson in hand shadow puppetry, with a bunny watching the action and the passers-by!

By: Rogue One and Art Pistol

If you’re planning an overnight stay in Glasgow then we recommend Glasgow Youth Hostel in the west end. It is the perfect base for groups, families and individuals looking to explore the inspiring street art of Glasgow.

Book your accommodation at our Glasgow Youth Hostel today!